Okay, so I have to get all of the machine sewing done on the birthday quilt for my niece by Friday night, so I've been working relatively non-stop (if you don't count sleeping and going to work).  I have to finish the hand stitching on a strip and a third of sashing, then I can make and sew on the binding, and create and attach the label.  I'm seeing my sister this weekend and want to give her the finished quilt to give to my niece (thereby saving shipping costs and getting to see my sister's reaction, if not my niece's--one of the drawbacks of living on opposite sides of the country).

I took the quilt-in-progress to Dear Jane class on Monday night and shared it with my friends there.  Happily, everyone approved of the choices I made, so I'm feeling more confident that my niece will like it.  This is the first quilt I've made specifically for an adult (the others have been baby quilts, quilts for me, or quilts made for a class and then given to someone), so I'm slightly worried that she it won't suit her taste.  On the other hand, I do think it's a turned out to be a lovely quilt and I think she'll be happy with it.  (I hope, I hope...)

Once the quilt has found its way to her, I'll post photos of the finished project.  Until then, I'll keep stitching.  Surely my thumbs will eventually heal!

In the meantime, I'm very happy with the new fabric that arrived in the mail yesterday.  I got three prints from Rosemarie Lavin's Breeze line -- Blooms in Chocolate, Geo Dots in Chocolate, and Willow in Lilac.  I guess this means I'll need to start yet another project! 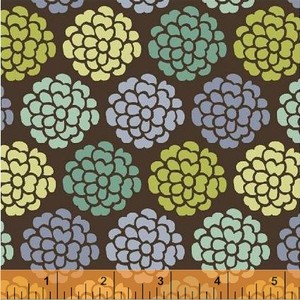 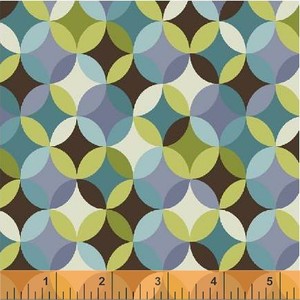 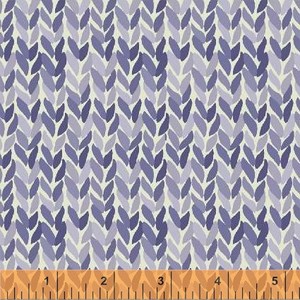 LOTS TO DO, BUT NOT MUCH QUILTING

Saturday was a busy day, which meant I didn't have time to get much quilting done. My sister-in-law's father passed away last week, so we planned a trip to Long Island for the viewing. He was a very sweet man and will be dearly missed by his family and friends.

Before we picked up our Zipcar, there was time to put together a quick wonky log cabin block for a request that came in from the quilt guild. One of the members sent an e-mail plea for "extra quilt blocks to make a special quilt for someone in NEED of some healing thoughts." Our challenge from the last meeting (as you may recall) was to make a 12-1/2" wonky log cabin block in spring colors. I finished my yellow, blue, green, and pink/red blocks last weekend and cut them up to combine them into one block. Luckily, I had plenty of yellow scraps left and combined them with some other fabrics on hand to make a block to send in for the extra project. 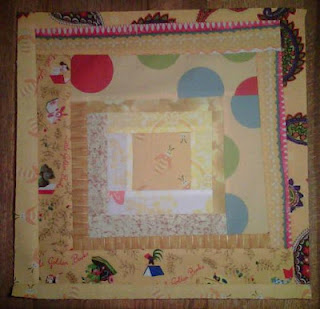 I was surprised that it only took me about an hour and a half from start to finish. Apparently, the more blocks I make, the quicker the process!

While we had a car yesterday, we also decided to make a trip to Ikea (not so easy on the subway). They had some fun fabrics, but I was disappointed that they didn't have Cecilia (white and black with green birds) in stock. They did have Julita (black and white), Durita (blue), and Britten Hus (gray), so I stocked up on those instead. 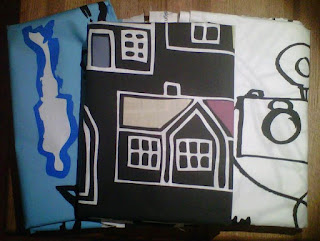 (Note to self: Bring scissors for next trip to Ikea. The scissors at the fabric cutting desk are VERY dull.)

I also picked up a small, inexpensive LED lamp that will hopefully help show my fabric colors more accurately than the compact fluorescent and incandescent bulbs we have in the house. I'll eventually get a larger lamp, but for $10, this will hold me for a while.

And now, I'm off to get my hair cut, then my husband and I are checking out Green Depot in Manhattan. How did we not know about this green product place before?
Posted by Andrea at 12:23 PM 1 comment:

A SUNDAY'S WORTH OF PROGRESS

Sunday kept me busy this week.  I found out that my niece is getting married this summer (Hurray!...another excuse to make a quilt), and I finished my challenge block for the quilt guild.  I found it less traumatizing to cut the blocks apart than I'd expected.  Certainly, this is one of those "measure twice, cut once" moments. 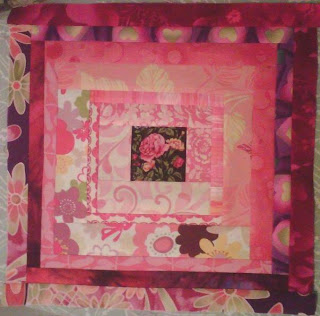 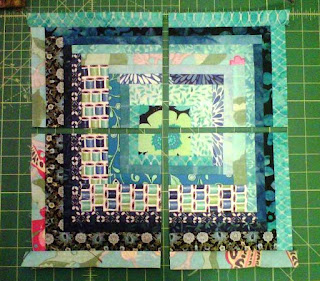 Here are the four pieces sewn together: 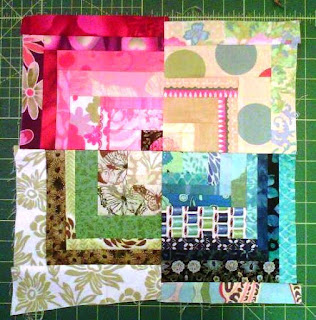 I like how it turned out.  With the way the center flowers came together, it kind of looks like there's a pink and blue flower with a green stem.  I hope it blends well with the rest of the blocks from the other guild members.  They're going to draw a name from everyone who brings in a block and the winner gets them all.  Instant quilt top, ready for assembly!

I also finished the sashing on the rows of my other niece's quilt, sewed the first two rows together, and stitched the sashing on the front (between the two rows).  There's certainly more hand sewing on this quilt than I anticipated when I signed up for the class, but it's all straight lines, so not challenging.

I like seeing the progress on all my projects this weekend.  I guess I'll just have to start some more!
Posted by Andrea at 3:00 PM No comments:

Although it's only March 4, it would appear that spring has arrived in Brooklyn. Yesterday's high was nearly 60 degrees, and the crocuses in the back yard are already starting to bloom. 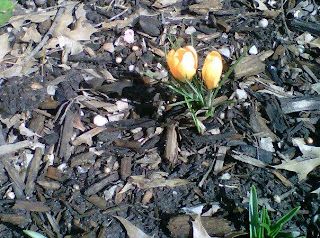 A little too early for spring to make an appearance, in my opinion, but there you are.

I had plans for progress on several projects for Saturday.  Our quilt guild set up a name tag swap and I'm working on one for Jessica.  Since I love foundation piecing, I decided to start with a block based on the Pete's Paintbox block (I-8) from the "Dear Jane" quilt. I had to scale it back a little to about three inches, so she won't be stuck wearing a huge name tag.  I'm still deciding what to do for the name portion (maybe some embroidery on a cream background?), but I'm pleased with the mini block. 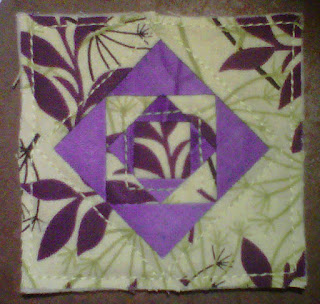 I also put together the blue block for the quilt guild challenge.  Since I've only been quilting for a few years, I didn't have masses of scraps for the log cabin (in four colors, no less).  Thank goodness, City Quilter (my default quilt store) sells scraps for $6 for all the scraps you can fit in a gallon zip bag.  I was able to get almost all the scraps I needed and was able to fill in the blanks with fabric I had on hand.  Here's the finished blue block. 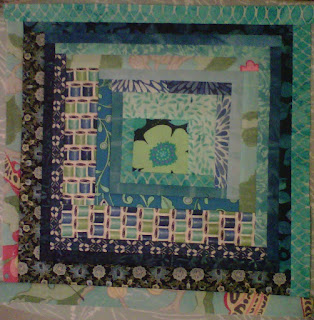 Now, I just have to finish the pink block and I can (gulp) cut them up and reassemble them.  Here are the pink/reds waiting for Sunday. 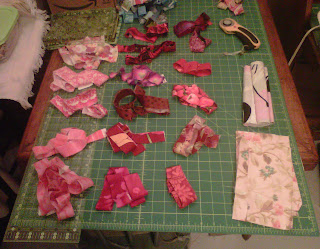 I also made good progress on appliqueing the sashing for my niece's quilt.  There's a strip of sashing between the blocks on front and back of each row.  One half is sewn on by machine and the other is hand stitched.  The quilt is a surprise (she know she's getting one, but hasn't seen the fabric or pattern), so here's a shot of the sashing between the back of two blocks. 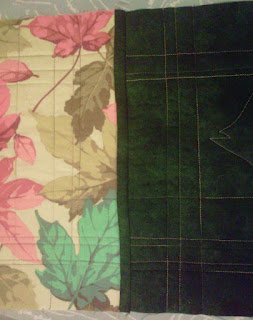 I need to finish the sashing on one more row, then I'll start stitching the rows together (again with sashing).  Then it's just borders and binding and I'll be done!  (But not this weekend.)
Posted by Andrea at 12:29 PM No comments:

I always look forward to the weekend, when I can spend long stretches of time with my quilting.  Friday night, I got home from work to find that my new Lyle Lovett CD had arrived.  I managed to wait until after dinner to hit "play" and sit down and put together one of my challenge blocks for the Modern Quilt Guild (the green one). 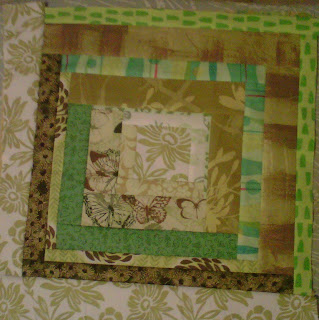 The assignment is to make a 12.5" wonky log cabin block in spring colors.  My plan is to make one block each in pink, blue, yellow, and green, then cut them in quarters and make a block incorporating all four colors.  It's my first attempt at a wonky log cabin and my first attempt as cutting up a block.  I'm a little scared.  If I mess it us, you can't "unpick" cutting up a block!  Here's the yellow block that I made last weekend. 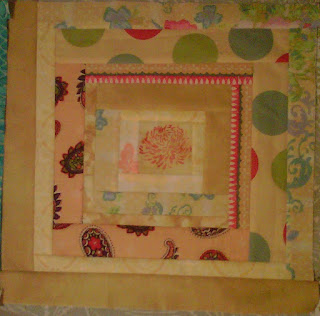 I also finished assembling the rows of the quilt-as-you-go Kaleidoscope Shadow quilt I'm making for my niece, so I had plenty of hand sewing on the sashing to keep me busy while watching TV on Saturday morning.

Loved the CD and felt a sense of accomplishment on my quilting.
Posted by Andrea at 9:22 AM No comments: