Last night was my monthly "Dear Jane" class. For those unfamiliar with "Dear Jane," it's a quilt from 1863 that was made by Jane A. Blakely Stickle. It is made up of 169 unique 4.5" blocks, 52 pieced triangles, four corner "kites," and 56 solid triangles.  It gets its name from a book by Brenda Manges Papadakis, in which she imagined writing letters about the quilt to Jane Stickle, hence "Dear Jane..."  She drafted patterns for each of the blocks, triangles and kites, and she gave names to each of the blocks (e.g., Maze of Madness and Bennington Star).

The City Quilter has an ongoing Dear Jane class, where students learn tricks and techniques for each block and give each other encouragement for getting closer to completing all the blocks. In truth, it's also a bit of a gab session, since many students have been taking the class for years. I often take advantage of the seasoned quilters in attendance to get input on other quilts I'm designing or working on.  Last night, one of the other students was soliciting suggestions for how she should quilt a small red and white quilt made up of tiny 1-inch half-square triangles.  (An off-center spiral was the leading contender last I heard.)

Here's the completed Dear Jane quilt that hangs at the front of the room for each class.  It was made by the teachers, Judy Doenias and Diane Rode Schneck. 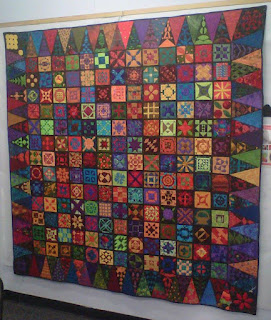 Each session, Diane chooses a couple of blocks and one triangle as challenge blocks. Anyone who completes one (or several) is eligible to win a little chicken pin cushion. I finished both challenge blocks this session (they were both foundation pieced, which I love doing), so I won a little purple chicken! 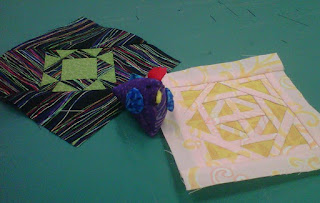 I'm taking this as a sign that I need to buy the purple chicken fabric I saw on etsy the other day...
Posted by Andrea at 7:30 PM