After making good progress on my "Carousel" basket weave quilt yesterday, I decided to take a short break this morning and put together the challenge block for the Metro Mod Quilt Guild June group quilt. (If I decide I don't like it, there's plenty of time for a do-over.)

The block is inspired by an antique quilt one of the guild members shared during show and tell at the last meeting. I wish I'd remembered that I have a tendency to misjudge the contrast between two fabrics and end up with a less than striking block. The fabrics I chose appeared to have more contrast before I cut them, but still showed promise when the pieces were ready for assembly. 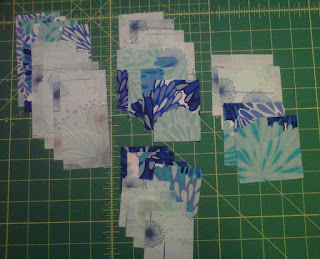 The block is a four-patch with four "mini blocks." Here are all of the minis, with the top two already stitched together (as well as my cheat sheet, since I didn't have the computer in my sewing room). 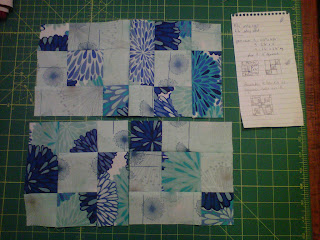 And here's the finished block. I like it, but I may try it again with more contrast.

After my break, I got back to work on the Carousel blocks and finished (what I thought was) 144 blocks, one more than I needed. The blocks on top of the stack have lattice on only one side because I hadn't decided yet which ones would be on which end, and the end pieces get a wider strip on one side. 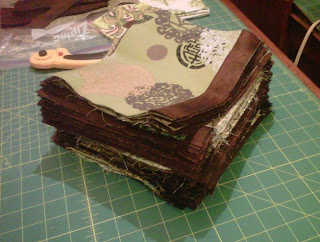 Since we don't have a space in the house big enough to lay out a queen size quilt, my husband and I headed out to the back yard. We laid out a sheet, which wasn't quite big enough for all the blocks, but it did give me a place to sit while I sorted out what should go where. 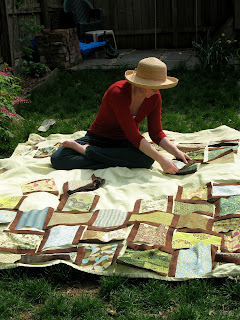 It took less futzing than expected to get everything in place, which means either I'm a genius at block sorting or I'll discover there's not as much randomness in the pattern as I'd hoped. I ended up with four extra blocks, three more than I thought there'd be. Apparently I had miscounted as I cut and assembled them. I'll probably use the extras on the back, along with some leftover kaleidoscope blocks from my niece's quilt. (I sneaked in a block from the main fabric on her quilt, too.) 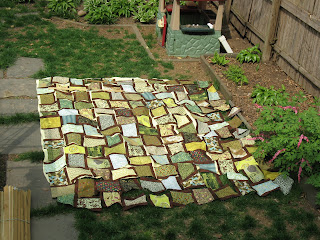 Overall, I'm pleased with the variety of blocks and the look of the quilt. 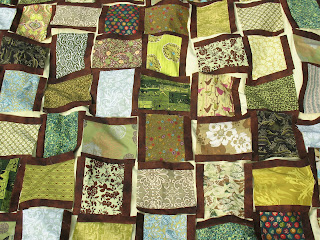 Special thanks to my husband for acting as photographer and assistant block sorter. (He's very tolerant and supportive of my quilting habit.) After coding the rows so I'd remember where everything goes, I brought the blocks back in the house and sewed the wide lattice strips onto the ends. Now I get to start assembling the rows!

Since my Dear Jane class is tomorrow night, I thought I'd better put some time in on my Dear Jane blocks. Both challenge blocks this session are perfect for foundation piecing (which I love), so I'd planned to do both B-6 (Wild Goose Chase) and C-8 (Hani's Crown). I'd finished Hani's Crown a few months ago, so that was already done. 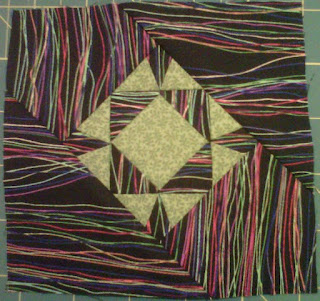 I started Wild Goose Chase at class last month, but had done NOTHING on it since. 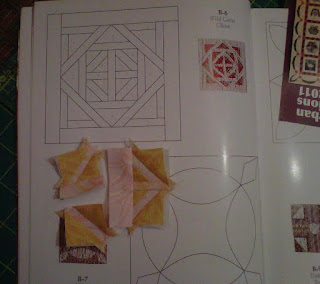 Lots of little pieces, but nothing particularly challenging. I'm happy to have achieved my goal of completing both blocks, although I didn't do any other blocks this month. 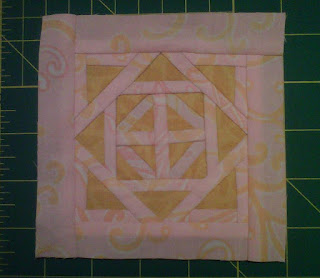 If only the weekend were just one day longer so that I could get more done!
Posted by Andrea at 11:18 PM